Home » News » The Southern Cape at Risk from Nature 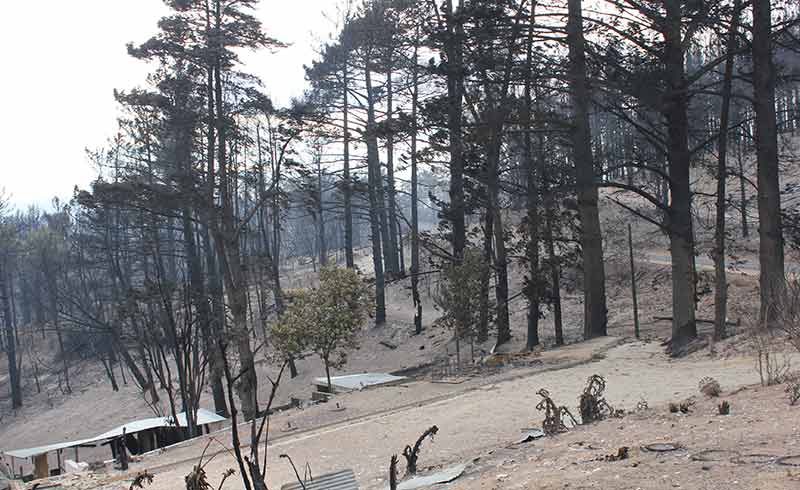 The Southern Cape will always be exposed to risks posed by nature, and history will repeat itself (again)

The recent destruction caused by wild fire in Plettenberg Bay, Knysna and surrounds is a wake- up call of note, says Cobus Meiring of the Southern Cape Landowners Initiative (SCLI).

Focusing on the risks posed by invasive alien plants to wild fire, water security and the destruction of biodiversity, SCLI seeks to promote to address the problem with urgency, following the (regional) wild fire disaster.

Most certainly, the fires were the most severe in almost one and a half centuries, and caused the most havoc and devastation in the region in modern times.

The recent fires are nothing new though, and the well documented “Great Fire” of 1869, after which historical buildings such as Portland had to be rebuilt, burned all the way to Riversdale in the West, and Uitenhage in the East.

What made the recent fires perhaps worse, was the dense stands of invasive alien plants, which contributed exponentially to our fire risk exposure in the region.

For a fire to occur, people refer to what is known as the fire triangle. The triangle illustrates the three elements a fire needs to ignite: Heat, fuel, and an oxidizing agent (usually oxygen).

Towns such as George, Plettenberg Bay, Sedgefield and Knysna, are subject to an interface with wild surroundings.

To quote Theobald and Romme (2007), “It can also include “fingers” of vegetation that protrude into build-up areas, “islands” of development that are detached from but in the proximity of built-up areas and what are referred to as occluded areas of isolated wild land within an urban area. Fingers often occur where land is too steep to build on. The management of these areas is therefore often neglected allowing it to become overgrown by invasive alien plants (IAP’s), and thus increasing the fuel load. Fingers are particularly important because they can serve as conduits, allowing wild land fires to enter and cause damage”.

Wildfires are increasingly affecting humans and their assets worldwide. Climate change and developments in fire-prone landscapes compound this problem (Moritz et al. 2014). This is most pronounced along the wildland-urban interface (WUI) where urban development borders on and intermingles with, flammable wild lands.

So what can we do to reduce falling victim to the same situation in a year or two from now?

Without sufficient heat, a fire cannot begin, and it cannot continue. Indigenous fauna will and can burn in the urban interface, but, without the boost received from invasive alien plants, it can never be as hot and destructive.
What we need to understand, and what we pro-actively must address, is the re-growth of invasive alien plants, in the burnt areas.

With the advent of spring, and following favorable winter rainfall, all burnt land runs the risk of being overrun by dense stands of invasive alien plants, which will allow the destructive cycle to repeat itself, only worse than before.

Without fuel, a fire will stop, or the intensity thereof will be significantly reduced. Landowners and land managers will have to join forces, and pro-actively prevent the ever resilient invasive alien plants from growing back with a vengeance. If we are to avert a repetition of the recent disaster, no amount of higher intervention but ourselves, so we will have to do the work ourselves!

Photo caption: Rheenendal: What made the recent fires perhaps worse, was the dense stands of invasive alien plants, which contributed exponentially to our fire risk exposure in the region