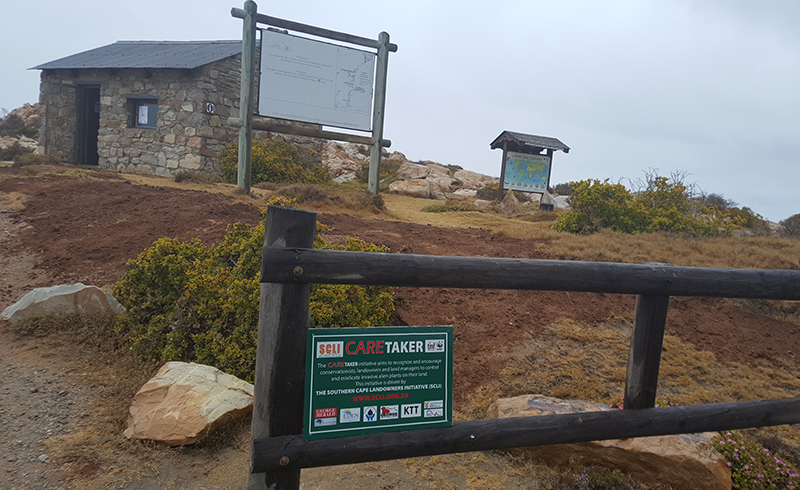 These days it is really hard to find a stretch of coastal dunes that are not affected by invasive alien plants. Tragically, and seemingly irreversibly, vegetation along the Southern Cape coastline and beaches has largely been replaced by Rooikrans and Port Jackson.

Except for places that are under conservation, and hence cleared from invasive alien plants, most of the once pristine coast is now lost to invasive alien plants. On the dunes there should be intermingling Cape Fynbos elements and grasslands, with subtropical shrubs, low trees
and climbers.

Making matters worse, unbridled development and an insatiable market for holiday homes as close as possible to the beach does not bode well for the future of what remains of our indigenous flora.
Risks associated with veld fires pose a problem on their own. Coastal vegetation types require fire as a natural management tool (as do all Fynbos species), and the fact that large stretches of coastline are under development, implies that wild fire cannot be tolerated, as it poses a real threat to properties as well as agriculture..

The Fransmanshoek Conservancy, situated near Vleesbaai (south of Mossel Bay), is one of the few places where a conservation minded community is taking responsibility for taking care of what remains of the natural dune vegetation.

It does seem that the only way to ensure that more coastal land is available for conservation, is for the authorities to refuse to allow further development to take place in close proximity to coastal dunes.
The only alternative seems to be that more stretches of coastal land must be bought for the purpose of conserving it.

HOW CAN LANDOWNERS CONTRIBUTE TO COASTAL (DUNE) CONSERVATION?
Landowners can contribute to the protection of coastal biodiversity by ensuring that their land is kept clear of invasive alien plants, and allowing indigenous flora to survive.

By keeping the developmental footprint of properties as small as possible, nature will find a way to survive where left undisturbed.

On a positive note, biological control organisms which has been released to attack both Rooikrans and Port Jackson plants are proving effective, and over time will suppress the spread of both as procreation is inhibited.

The Southern Cape Landowners Initiative (SCLI), is a public platform for landowners and land managers with an interest in the control and eradication of invasive alien plants. SCLI is supported by the Table Mountain Fund (TMF), an associated Trust of WWF SA www.wwf.org.za