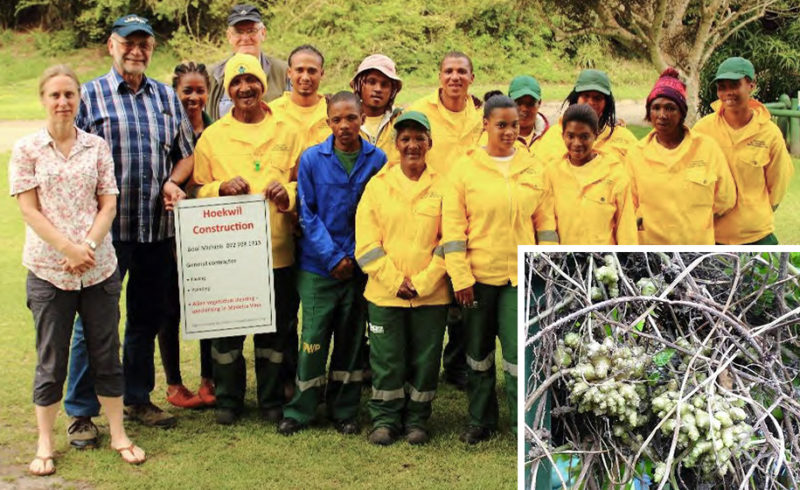 The Garden Route section of SANParks has been invaded by Madeira vine (Anredera cordifolia)
This South American category 1b alien invader is now a common sight along the coastal zone from Wilderness eastward towards Port Elizabeth. It has fleshy heart-shaped green leaves and spikes of white flowers (February to April). It produces multiple aerial tubers along the stems and each one of these is capable of starting a new plant. SANParks has recently completed its first strategic plan to deal with this problem. The Constantia Kloof Conservancy (CKC) contacted SANParks for assistance, as this pest is also invading the southern fringes of the conservancy along Whites Road and Constantia Drive.

Carlo De Kock, Biodiversity Social Projects (BSP) Manager for the Garden Route National Park, and his wife Celeste arranged an information and practical training session for the CKC hacking group. A group, together with Christo Fabricius from the neighbouring Bird Sanctuary met with Carlo, Celeste, Oom Booi Michiels and his team of workers. Oom Booi is a general contractor based in Touwsranten and also an expert in the clearing of alien invasive vegetation. After an opening session, conducted by Carlo, covering the characteristics of the invasive plant and the extent of the problem, Oom Booi and his team gave a practical demonstration of how they go about removing this pest.

Every piece of plant material removed is double bagged and incinerated. After seeing Oom Booi in action, there was a glimmer of light at the end of the tunnel. Carlo said SANParks is planning to release a biological agent to combat Madeira next year when it starts flowering.

CKC sponsored a new sign for Oom Booi as a token of its appreciation for the time spent training. If you have this pest in your garden you will need expert advice and assistance in clearing it. Should you require assistance with the removal of Madeira vine contact SANParks for guidance.