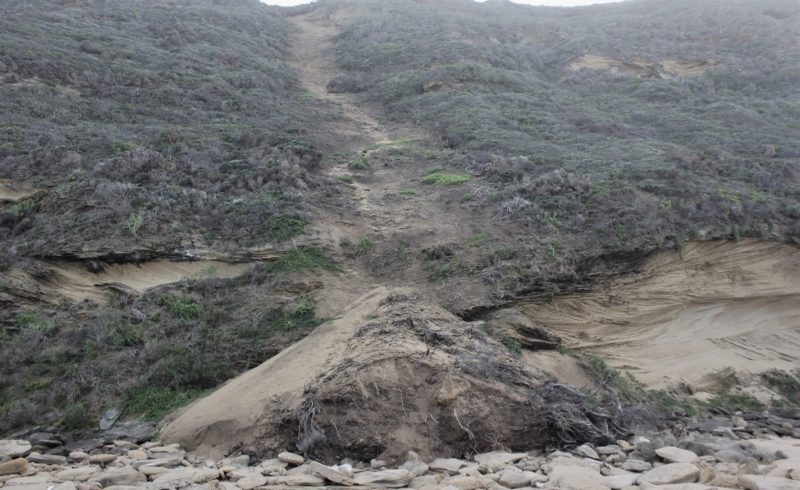 “Much of the erosion and degradation of the Southern Cape coastline, in particular from Mossel Bay to Storms River, is well documented and closely monitored by scientists, and for good reason,” says Cobus Meiring of the Garden Route Environmental Forum (GREF).

He says even a modest rise in global sea levels and increased wind velocity make for exponentially stronger wave action, which in turn results in rapid shoreline degradation. The degradation potentially renders coastal communities and infrastructure vulnerable to irreparable destruction and displacement.

“Coastal degradation is a complex matter and due to a great many factors, the manner in which it manifests is not uniform.”

“For example, the ongoing degradation of a dune system in St Francis, leaving multi-million rand properties exposed to the might of the open ocean, is not necessarily the same process as the degradation of ancient sand dunes at Kleinkrans near Wilderness, or severe damage to roads and the promenade in Cape Town and Bloubergstrand.”

According to Meiring, the overall onslaught by nature on the Southern Cape coastline is relentless, consistent and on the increase with every winter as cold fronts bring ever-stronger winds and increasingly powerful wave action.

“Climate change and global warming are matters that are frightening to present and future generations, but there is a lot of ordinary folk can do to mitigate the damage to the environment. A point of departure is the way we plan future developments along the Southern Cape coast, the way we manage our water sources, and the way we conserve what remains of our biodiversity,” concludes Meiring. 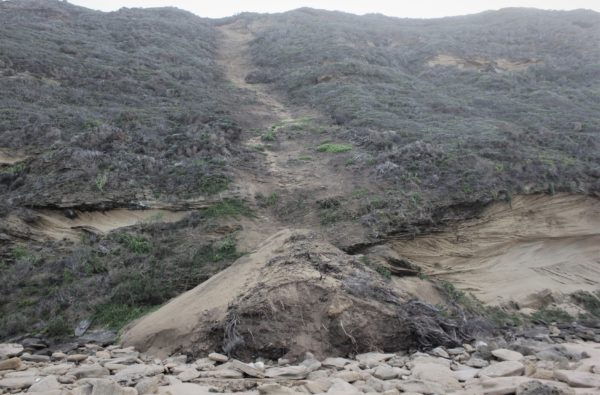 Coastal degradation along the Wilderness coast near Kleinkrans is on the increase and is symptomatic of increased wave action, stronger winds and global sea level rise. (Photo: Cobus Meiring)

** The Garden Route Environmental Forum (GREF) is a regional forum for collaboration in conservation, environmental adaptation and community interaction. The forum aims to coordinate regional conservation efforts, serves as a catalyst to drive climate adaptation practices in the Southern Cape and strives to establish a better-coordinated approach to environmental management.