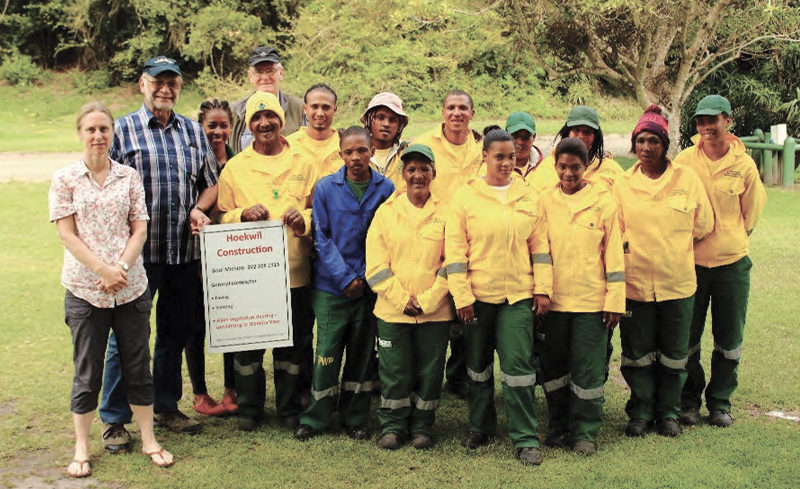 Dear CKC Member
Conservancy Signs
New UV protected Conservancy signs have been made and if your sign has faded and you wish to replace it a new sign will cost you R40. Please contact the committee in this regard (new members will receive their initial sign free of charge).
The large CKC sign on the wall at the bottom of Constantia Drive was also badly faded and has now been replaced with a new UV protected version.

The committee has held discussions with Cobus Meiring and Janet van Ginkel of SCLI about the possibility of posting articles on their website. It was agreed that this could prove useful to our membership and our first posting is the article recently published in the George Herald about the conservation award we received. So if you missed the story in the George Herald you can now read it on the SCLI website under Constantia Kloof Conservancy. We intend to publish more articles like this and possibly a series on the indigenous trees found in our conservancy on this website at regular intervals so please visit it. You will also find many other interesting & relevant articles there, by way of example, a report and comment on the recent devasting veld fire that caused extensive damage to parts of Wilderness & Hoekwil. 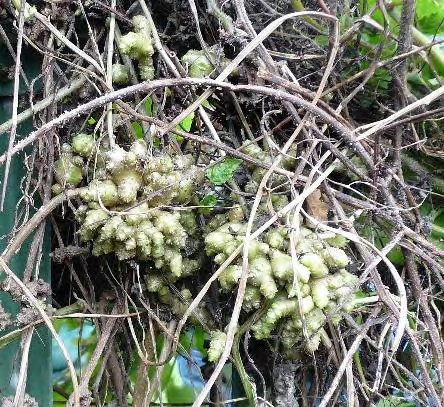 A small number of CKC members and Christo Fabrious from the neighbouring Bird Sanctuary met with Carlo and Celeste de Kock from SANParks together with Oom Booi Michiels and his team of Madeira Vine clearers on Saturday 20th August as planned. It was very apparent from the way Booi explained the methods they use to clear Madeira Vine that he is passionate about his work and he has passed on this attitude to his team. They each have their own particular role to play and are diligent in carrying it out. Booi first explained the method they use and then gave a practical demonstration, explaining what he was doing as he went along. After the demonstration we were each given a section to clear under Oom Booi’s watchful eye. We now realise just how meticulous you have to be to ensure that you do not leave one piece of leaf or aerial tuber behind, as that will root and form a new plant.

The above pictures show (left) Booi Michiels at work and (right) the cleared fence.

Note how the undergrowth was cleared enabling them to see any fallen tubers/leave. Follow up is essential in order to eradicate the plant. Booi Michiels is available to work on private land and can be contacted on 072 708 1913
While at the morning hack it was suggested by one member and endorsed by the other members present, that the CKC should sponsor a new sign for Oom Booi as a token of our appreciation. This was presented to Oom Booi at Ebb & Flow on the 26th September. It was touching to see his tremendous gratitude for this gesture on the part of the CKC. 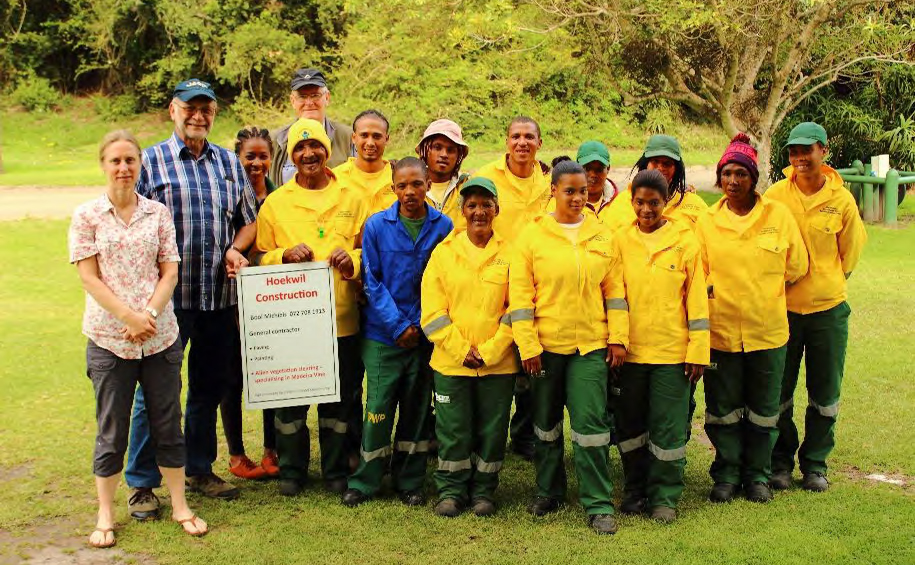 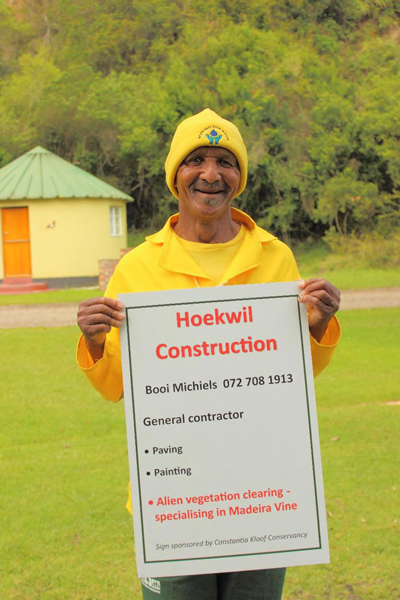 Oom Booi Michiels proudly displaying his new sign. The small print at the bottom states that the sign has been sponsored by the CKC.

Cold sign and below right the new one sponsored and presented to him by the CKC.

The CKC was founded in 2007 and the Committee has therefore decided that we should produce a small booklet featuring some of the flowers, trees and wildlife etc. found in our area to commemorate our 10th anniversary next year. We have already commenced taking photos of some indigenous flowers and local birds but are also appealing to members to please forward us good quality pictures of any local indigenous wildlife, birds, insects and flowers that could possibly be used in this publication. (mail to jjcallanan@telkomsa.net) It is our intention to distribute a free copy of the booklet to each member so please help us to make this a worthwhile exercise.

George Municipality requires the CKC to submit a report in support of every OSCA permit application within the Conservancy. We always endeavour to add value to the process and don’t simply endorse the report compiled by the environmentalist agency involved. By way of example we listed the names of 25 indigenous trees we identified on a property that we recently reported on as follows:

We have been greatly encouraged by some very positive feedback received from non-members of the CKC and hopefully this will translate into some new membership applications. By way of example see the following quotes from e-mails recently received in response to our reports:

i) “Many thanks ……. my wife and I wish to compliment you on the quality and comprehensiveness of the report. We now know a whole lot more about our little piece of the Wilderness paradise! …We are very keen to learn more about the trees on our property, and especially their locations. Would it be possible for us to meet with you, at some convenient time, to walk through the property and identify the trees for us”?

ii) ” Thank you for the very comprehensive report that you have prepared for our OSCAR permit application. We are particularly impressed by the detail of the various plant species, and therefore the
commitment and time on your part to prepare the report. We would very much like to take advantage of your offer to advise on which plants are alien, and which should be preserved in situ where possible”.

Dog control
We have recently received some complaints from members that dogs roaming the area are frightening off the local wildlife. We therefore appeal to all dog owners to please keep their animals under control at all times. If you experience problems in this regard please approach the owner and attempt to resolve the matter amicably. If the problem persists we suggest that you phone the George Municipal Law Enforcement section 044 801 6350 and let them deal with the matter. In this context we include the following excerpt from one of our recent OSCA application support letters relating to the abundant wildlife still found within the Conservancy.

“There is significant evidence of wildlife activity within the CKC, as evidenced by the amount of animal droppings seen on site. The occurrence of bushbuck, bushpig, grysbok, badger, caracal and many smaller mammal species such as mongoose and rodents within the Conservancy has been confirmed by member sightings over the years. This has also been confirmed more recently by means of camera traps that the CKC set up in a number of locations”.