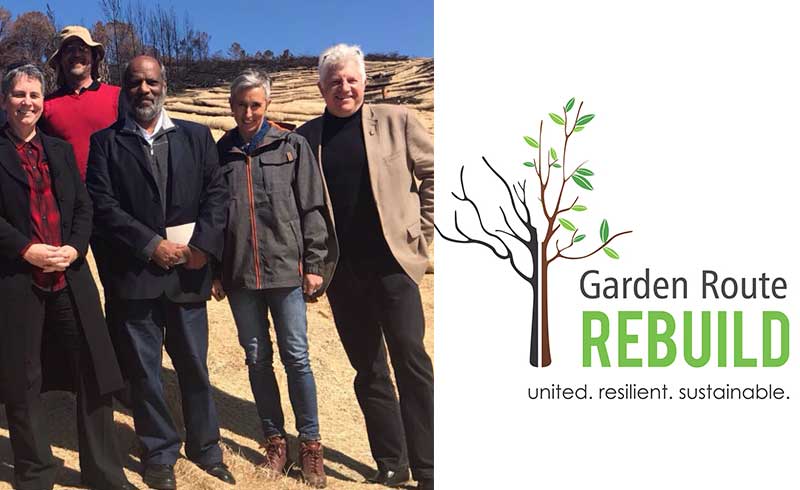 Because of denuded landscapes, even mild rainfall can cause soil displacement, with sand and mud washing through downstream properties in Brenton and Belvidere.

Literally hundreds of tons of soil have successfully been prevented from washing down the slopes, causing erosion and further environmental damage.

Minister Winde, whose own house was burnt to the ground in Belvidere Heights, expressed his satisfaction with progress made with the efforts to prevent further damage to the environment. 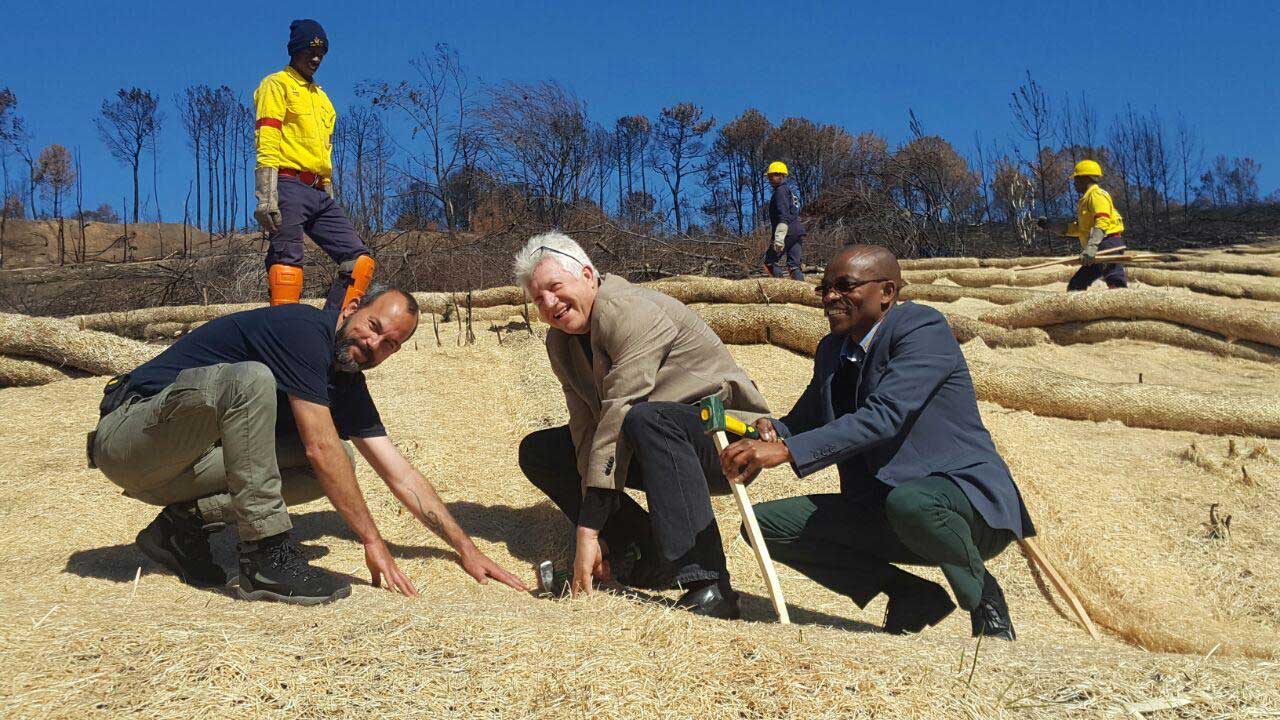 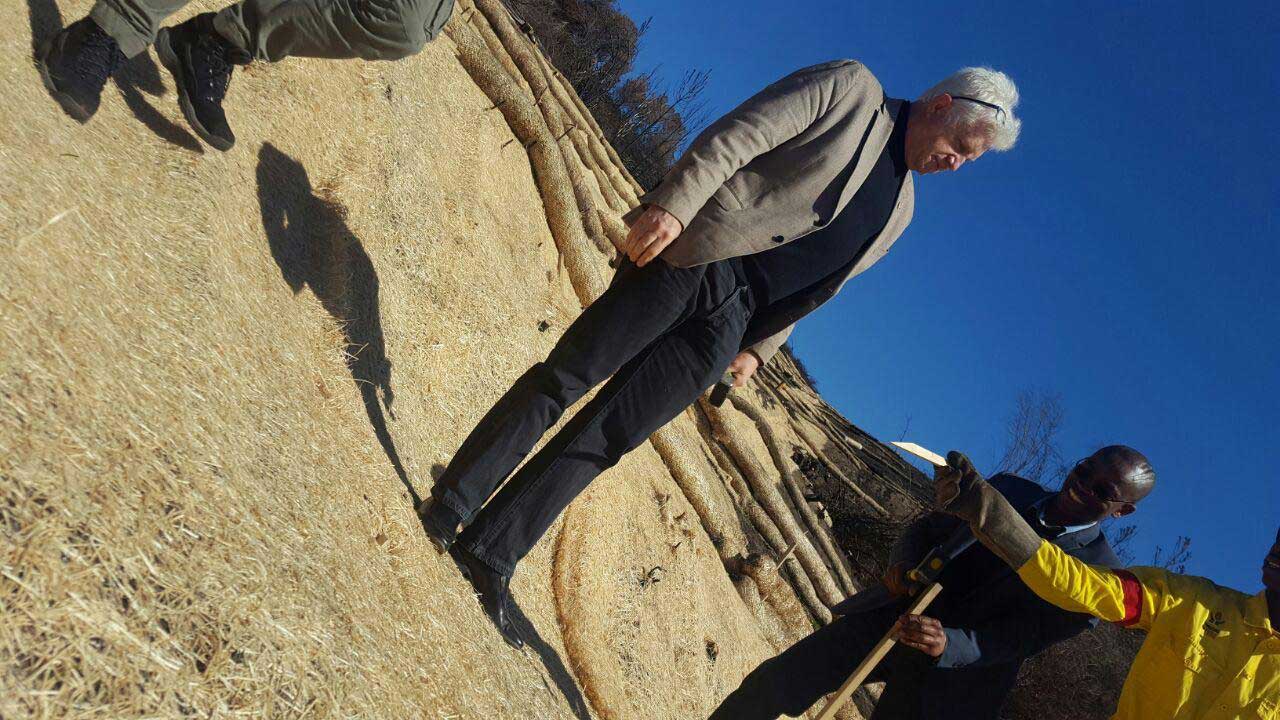 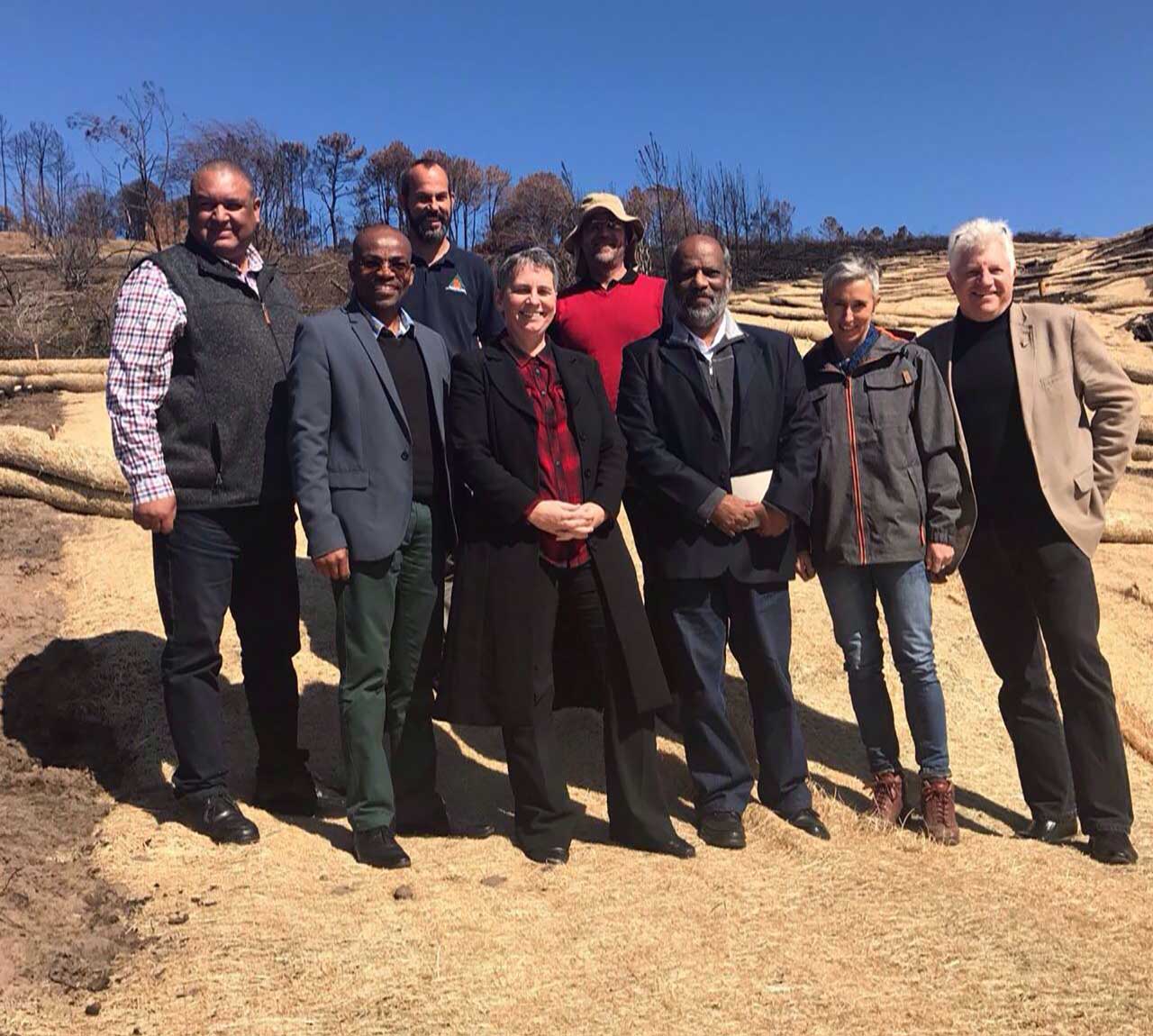 Making a stop at the site of the old Crabs Creek restaurant, Minister Winde expressed shock and dismay over brazen illegal dumping of building rubble.

Minister Winde is of the opinion that citizens should take action when they witness illegal dumping, and report the registration numbers of vehicles or individuals who make themselves guilty of dumping. 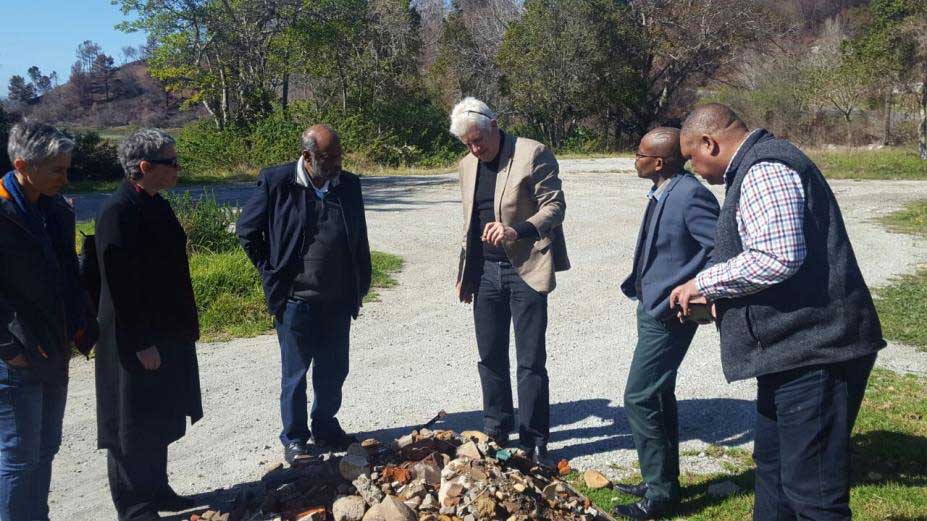 Rapid Environmental Restoration Response (RERR), is a term coined by GRRI in the aftermath of the Knysna fires.

Instituted by Japie Buckle, (an ecologist from DEA Natural Resource Management Programmes), Pam Booth from Knysna Municipality, and the GRRI Environmental team, RERR include the following:

3. Lost species blooms in Brenton on Sea
George Lily (Cyrtanthus elatus, Scarborough lily), found blooming in Brenton on Sea.
The area where the lily has been seen is in the direct vicinity of the Brenton Blue butterfly. 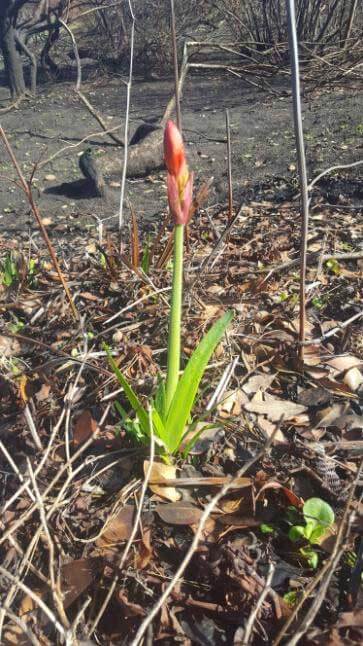 Dr Dave Edge, a renowned conservationist, and one the world’s leading experts on butterflies, is a member of the GRRI Environmental restoration team.

After the fire, there was no sign of the butterfly’s larval host plant, Indigofera erecta – not unusual for this time of year, because it is currently in its dormant winter state with underground.

The effect on the Brenton Blue butterfly of such a severe fire is not known, although it is believed by butterfly experts that it has adaptations which should enable it to survive such a fire. The larvae and pupae of the butterfly are underground at this time of year, tended by host ants Camponotus baynei, and feed on the rootstocks of the host plant. It is believed from studies on other butterflies with similar life cycles that the larvae and pupae have the capacity to remain in a diapausal state for several years until surface conditions are again favourable.

We trust that the plants will recover, then the ants will follow, and hopefully the Brenton Blue will make a full recovery. 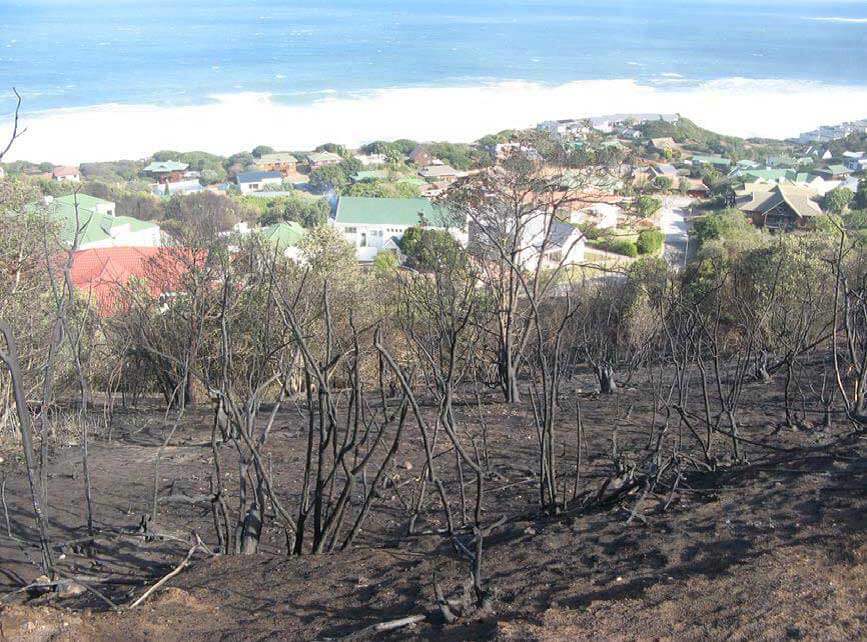 In effort to stabilize a burnt slope and riparian slope in White Location, efforts will include restoring the environmental integrity of the seep line.
The prevention of down- stream siltation, and leaching of contaminated storm water into the Knysna estuary, will be the objective. 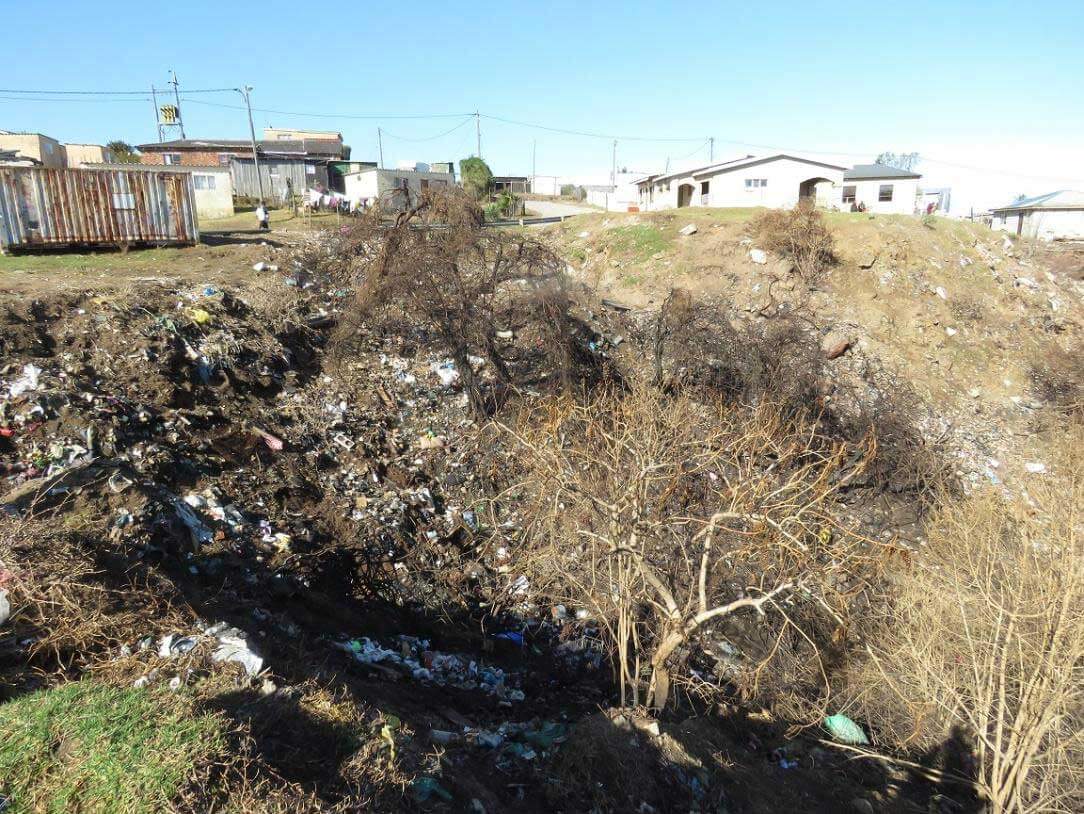 Susan Campbell, a Knysna resident and ardent conservationist, owns land in the Brenton Peninsula, between Buffels Bay and Brenton on Sea.

Today all that remains of a tented camp is a stone chimney. More importantly, from a biodiversity conservation point of view, the landscape is extremely valuable.

In an effort to stimulate the growth of the Fynbos in the area, a controlled burn was conducted in the area mere weeks before the Knysna fire. 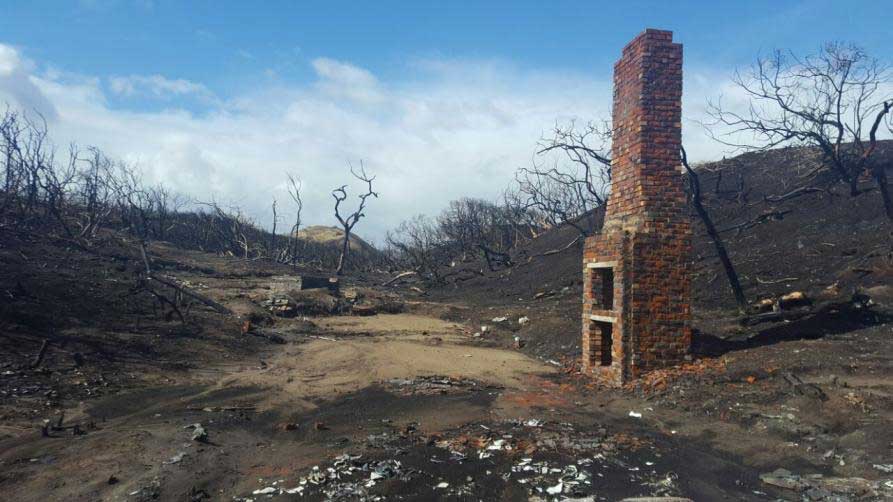 From a monitoring perspective, GRRI Environmental will keep a close eye on developments on the Brenton Peninsula in order to determine to what extent indigenous flora makes a comeback.

Positive signs that indigenous plants will resurrect are already visible at places.