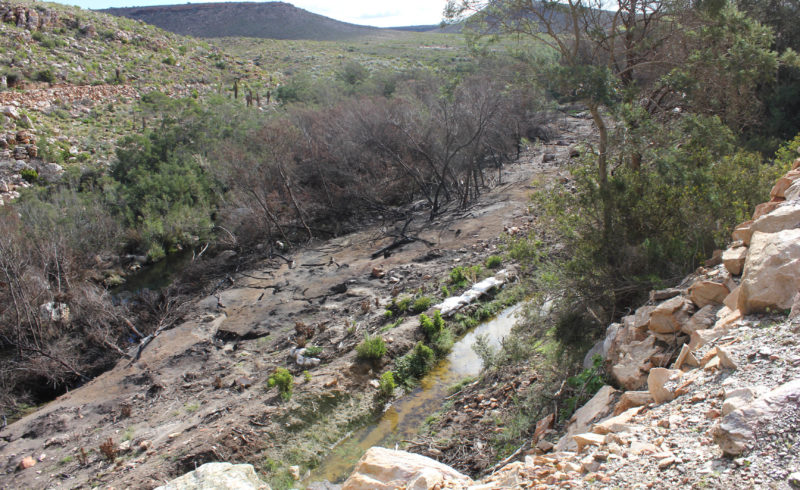 “The damage done to the South African natural environment and infrastructure (for example, rivers and catchments) by the scourge of black wattles (Acacia mearnsii) is immeasurable. As the country is facing up to the inevitable consequences of climate change, and primarily the very clear and present threat of severe and lasting drought in several provinces, the presence and spread of black wattle simply must be stopped without delay,” says Cobus Meiring of the Southern Cape Landowners Initiative (SCLI).

“South African landowners and conservation and environmental management entities have to spend billions of rand and resources annually in a never-ending struggle against invasive alien plants such as black wattle, whilst the problem can be solved relatively easily by the introduction of effective biological control agents (specific and damaging natural enemies) – in this case, weevil/s that are present in the home country of Australia.”

As a mere example, Meiring stresses the continuous threat of black wattle invasions, especially for landowners who must clear their land at their own cost. In an effort to save Garden Route rivers from complete destruction by black wattle invasions, SCLI and private landowners are collaborating and have cleared thousands of hectares of wattle infestation, but the problem is never-ending and will remain a taxing problem for concerned landowners.

According to Meiring, the South African authorities who control the use of biological control agents on plants have approved the release of a biocontrol agent that quite effectively suppress black wattle from seeding, but have thus far not approved the release of a biocontrol agent which can effectively attack the vegetative components of black wattle, and so the trees remain a persistent environmental disaster nationally. This is in part due to the fact that seeds already in the seed bank are long-lived, with some estimating that they can remain viable for more than 30 years.

“The reasoning behind protecting black wattles from biological agents that can successfully attack the vegetative parts of the plant and eradicate black wattle trees, is that there are commercial wattle growers who make a living from the biomass they produce, and therefore, effectively expose the entire South African natural infrastructure (rivers, catchments, biodiversity, etc.) to the destruction brought about by black wattles. Commercial wattle growers utilise black wattle for tannins and wood chips, much of which is exported. Ironically a study produced 20 years ago demonstrated that the costs of wattles to the natural environment, including water resources, was significantly higher than the benefits that accrued from its use.”

Says Meiring: “For the sake of restoring South Africa’s environmental landscape by introducing effective biological control in order to stabilize the country’s ability to deal with climate change in the face of damage done through black wattles, SCLI would like to urge the Department of Forestry, Fisheries and the Environment (DFFE) to make difficult decisions and to address this issue as a matter of urgency for the future of our precious environment.”

Photo: Black wattles in riverbed: Damage done to South Africa’s natural infrastructure (such as rivers and streams) by black wattles justify the introduction of biocontrol measures to kill off the trees, even if it is to the detriment of those farming black wattles commercially. (Photo: Cobus Meiring, SCLI)