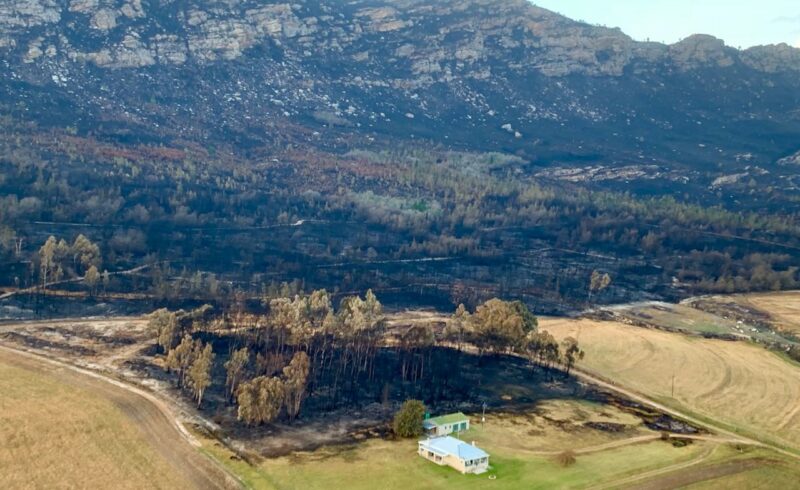 “7 June 2022 marks the 5th anniversary of the worst wildfire disaster in the history of South Africa,” says Cobus Meiring, convener of the Garden Route Environmental Forum (GREF), based in George.

“In that event, more than 20 000 hectares burnt to the ground over a four-day period. More than 800 homes and structures were destroyed, several lives were lost, close to 5 000 hectares of prime plantations were destroyed and immeasurable damage was done to infrastructure and the natural environment.”

“Barely a year later in 2018, the Garden Route suffered more wildfire disasters both close to the coast in the Still Bay and Riversdale areas including a fatal fire-fighting helicopter crash, and close to 100 000 hectares of agricultural and mountain landscapes burnt down in what was dubbed the Outeniqua fires. The fires raged for weeks and came frighteningly close to the outskirts of built-up and suburban areas at George and Rheenendal.”

Says Meiring: “Winter weather conditions always – as displayed as recently as 18 May this year in George with several wildfires fanned by strong warm winds – have the potential to unleash the fury of mother nature in one way or another in the Western Cape. The Garden Route, in particular, is prone to fall victim to weather conditions favourable to run-away wildfire disasters, flooding on a grand scale and the havoc and danger high seas and strong winds can bring about in exposing coastal vulnerability.”

“In the years following the respective wildfire disasters, much was done in the region to ramp up fire-fighting capacity in the Garden Route. The Garden Route Disaster Management Centre, in collaboration with Working on Fire (WoF), the Southern Cape Fire Protection Association (FPA), PG Bison and MTO Forestry, SANParks and CapeNature as well as the dedicated fire-fighting units of the respective municipalities in the Garden Route assisted in addressing fire-fighting capacity in the region. A new runway for fixed-wing fire bombers and dedicated sites for fire-fighting helicopters stationed at George, including essential equipment and facilities to refuel aircraft on site, as well as mobile water tankers, will allow for faster mobilization and reaction times in the event of the outbreak of wildfires.”

“The presence of invasive alien plants (IAPs) prospering everywhere in the Garden Route landscape played a significant role in all the recent wildfire disasters. Over the past few years, many landowners have spent vast amounts of resources to remove them from their properties in order to safeguard their land from fire risks associated with the vast fuel load invasive alien plant biomass present to run-away fires.”

“Unfortunately, there are many landowners who failed to act when they had the opportunity to clear their land of IAPs when they had a window of opportunity following the 2017 fires. In several places the levels of IAP infestation are today higher than before, setting the scene for a possible repeat of the fire disaster,” warns Meiring.

He emphasises that owning property in the naturally beautiful Garden Route comes with the additional responsibility of sound environmental management, especially when challenged by invasive alien plants.

“Managing invasive plant growth can be costly. It is therefore important to do proper planning to eradicate, manage and suppress the regrowth potential of IAPs. It is something landowners must constantly be mindful of. Failing to do so can have catastrophic consequences and change lives in a matter of hours when wildfire strikes,” says Meiring.

The Annual GREF/Garden Route Environmental Management and Climate Change Indaba will be hosted by the Garden Route District Municipality (GRDM) and the Garden Route Environmental Forum (GREF) in Wilderness on 23 June 2022. This year’s theme is:  “Preparing the environment for a changing climate.” The Garden Route has been feeling the brunt of climatic changes during the past few years, manifesting in the form of unprecedented wildfire disasters and prolonged drought. In order for the GRDM to better prepare the region for what lies ahead in terms of climate change, stakeholders will gather to share experiences and ideas.  If you are interested in attending the event, please RSVP: email: marti.kirstein@gmail.com.

The Annual Garden Route Environmental Management and Climate Change Indaba in George is an institutional arrangement and it continues to provide a strong and valuable platform for cooperation and communication between all entities on matters central to sustainable environmental management and climate change.