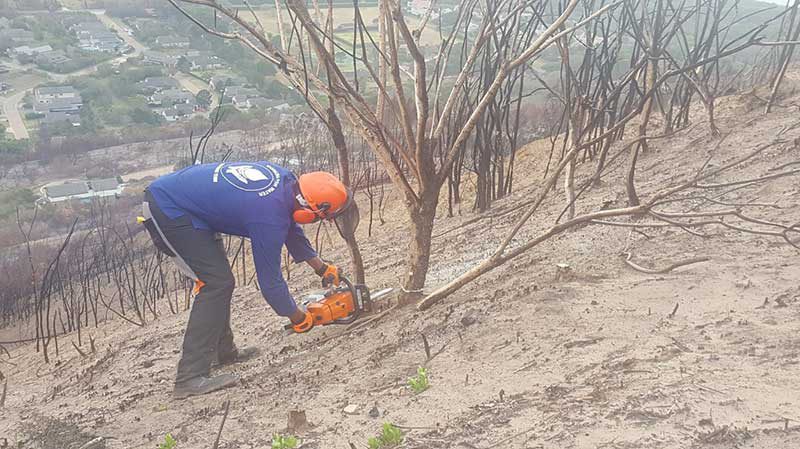 Before the Knysna fires raged through the Garden Route, invasive alien plants were rife throughout the landscape. Because of their densities and size, the biomass from the invasive alien plants, served as rocket fuel for the fires, says Cobus Meiring of the Southern Cape Landowners Initiative (SCLI).

These days, invasive alien plants are viewed from a risk management point of view. Of these risks posed, fire and water security is perhaps the most prominent. Now that spring is in the air, and the Garden Route received soft and generous rain, the environment effected by the fires is bouncing back, bringing with it the scourge of invasive alien plants.

Following the Brenton example, indigenous grass species were first to make their appearance, and seemingly be the dominating species. However, following hot on their heels, exotic/ invasive alien plants make their appearance in vast numbers, and very quickly transform the effected landscape into mono culture where no indigenous plant can be found.

So how will we deal with this? As part of the environmental rehabilitation work, conducted by the Garden Route Rehabilitation Initiative (GRRI), a vast amount of planning is afforded to the development of a comprehensive strategy to deal with invasive alien re- growth in the areas affected by the fires.

The species most aggressively growing back (at this stage), is black wattle and rooikrans, and the small plants are growing back like the hairs on a dog’s back.

From a planning point of view, the alien plants must be allowed to grow to a fair size before treating with herbicide can be effected.

Landowners who require information on how to address invasive alien plants on their land can visit the SCLI web site (www.scli.org), where a copy of an invasive alien management plan for landowners can be found.

Featured Image: Following the Knysna fires, invasive alien pants, such as Wattle and Rooikrans are already showing aggressive re- growth.