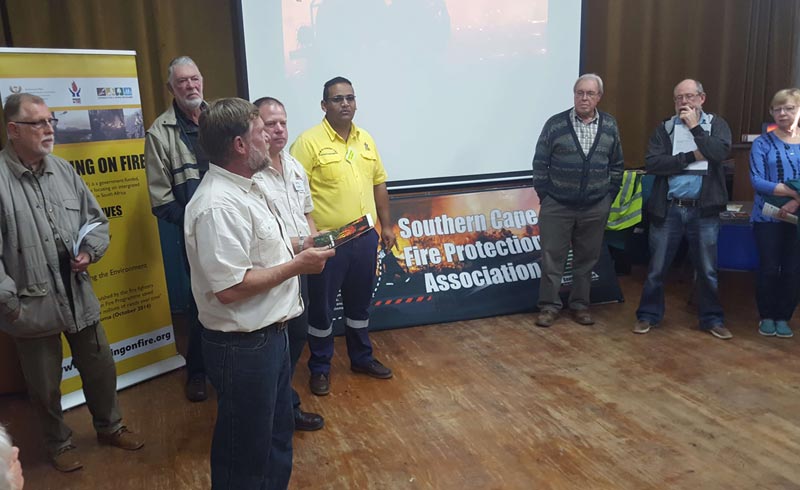 Hoekwil set to establish a Working on Fire base

Hoekwil residents recently attended a series of meetings, aimed at establishing a Hoekwil Working on Fire base in the hamlet. This comes on the back of fires that swept through the area, with several properties in Wilderness being destroyed, says Cobus Meiring of the Southern Cape Landowners Initiative (SCLI).

Dirk Smit, representing the Southern Cape Fire Protection Association (SCFPA), addressed the event saying “I think the unprecedented fires that destroyed Knysna and surrounds was an eye opener, and rural landowners are fast realizing how exposed they are to the dangers of wild fire”. Smit encouraged landowners to become members of the FPA, as the FPA has access to resources required to assist landowners, in being prepared for the advent of wild fire.

Advice to landowners on clearing land from invasive alien plants.

Melissa Mackay, local landowner and co-convener of the meeting, was on hand to give advice to landowners who required input on the various laws pertaining to clearing land of invasive alien plants.

Melissa said that, “Basically, the clearance of vegetation in a Critically Endangered or Endangered vegetation type (of which we have several in the area), requires Environmental Authorisation in terms of the National Environmental Management Act (NEMA, Act 107 of 1998). This obviously can cause conflict with the Veld & Forest Fire Act (Act 101 of 1998) which requires landowners to protect their properties by means of a fire break”.

“In order to address this matter, the Department of Environmental Affairs & Development Planning (DEA&DP) interprets the clearing of vegetation as any clearing that causes soil disturbance (i.e. roots and all) and will lead to the complete degradation of that vegetation type. This means that in order to comply with both sets of legislation, a fire break can be cut by means of brush cutting. No bulldozers, excavators, etc. can be used as that will be seen as soil disturbance. The benefit of belonging to a Fire Management Unit means that fire breaks can be put in place on a collective, strategic basis so as to avoid denuding large tracts of land where properties are small. This will ensure that the landowner is still protected by the Act, whilst ensuring that the vegetation remains as intact as possible, which is after all the reason many of the landowners live on small holdings and rural areas”.

“If anyone is unsure, it is best to approach the Southern Cape Fire Protection Agency, the local Fire Management Unit, the DEA&DP or an environmental consultant for advice”.

For some years SCLI (as part of its Milkwood Preservation Campaign), has expressed concern about the remaining coastal Milkwood forests, along Sands Road in Wilderness, falling victim of invasive alien rankers and creepers.

Fortunately, SANParks has deployed a local team to clear the forests and the railway line, through to Leentjiesklip, of invasive alien plants. 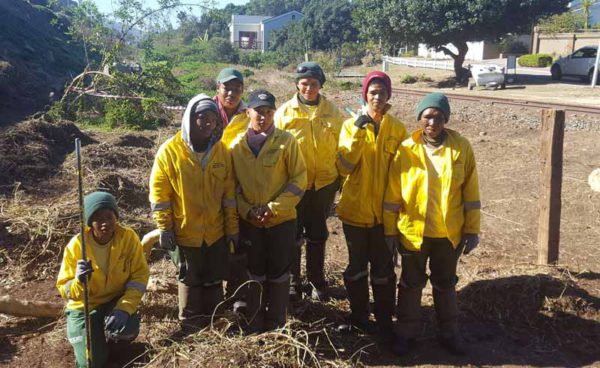 Photo Insert: SANParks has deployed a team to clear, what remains of a coastal Milkwood forest along Sands Road in the Wilderness, of invasive alien plants.

SCLI remains concerned about landowners cutting down Milkwood trees near their properties out of fear, following the fires in the area, and want to reiterate that Milkwood trees are a protected species, and cannot be cut without official permission from the Department of Forestry in Knysna.