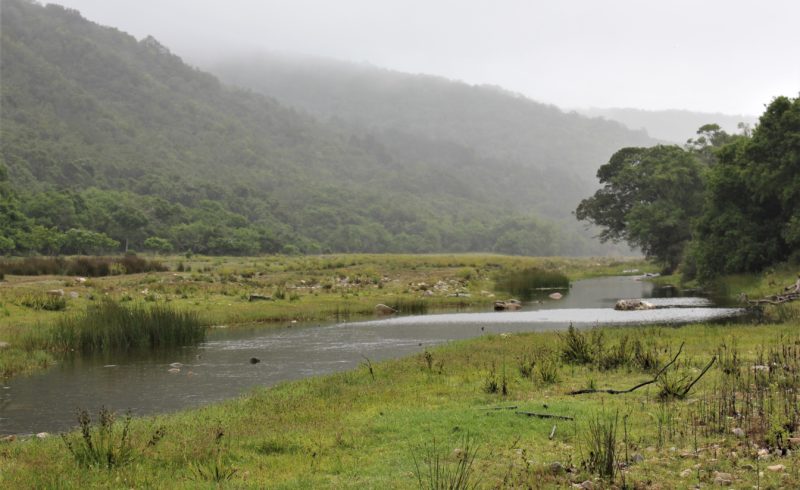 “Over past decades the southern tip of the Eastern Cape coastal plateau has become heavily infested with invasive alien plants, with devastating effects as one wildfire disaster followed the next, and water security in the region continues to threaten sustainable farming and living in the area. The rich biodiversity of the area went into steep decline as unique indigenous, and often endemic habitat shrank to a fraction of what it should be.”

“Perhaps the most visible example of the destruction caused by the 2017 wildfire disaster fuelled by invasive alien plants was the almost complete destruction of the historic landmark Woodridge College, that is clearly visible from the N2 highway.”

“The series of wildfire disasters in recent times did provide landowners with a window of opportunity to address invasive alien plant growth and spread whilst new growth was easy to suppress. Unfortunately, aggressive regrowth of pines, Port Jackson, Long-leaved wattle, Black wattle and Blackwood, to name but a few, has now set the scene for a repeat of the intense and destructive wildfires that did untold damage to an already fragile environment.”

According to Meiring, landowners and land managers along the Van Stadens River took drastic action to improve the predicament of the once pristine river and catchment, and much work has already been done in terms of invasive alien clearing along the riverbed, on the surrounding landscape and along seep lines, streams and wetlands.

He says in many places where invasive plants were removed, nature responded fast and remarkably well. For example, clusters of Yellowwood trees appeared seemingly out of nowhere along the riverbank on the lower reaches of the riverbed, whilst increased water flow no doubt has an immense impact on the general river health and the state of the estuary and the marine and aquatic life it supports.

“Further down south along the coast, SCLI, in collaboration with private landowners, embarked on a similar exercise with private landowners in the Knysna, Goukamma, Touw, Kaaimans, and Great Brak river systems. SCLI is in the process of reviving the ecology of the systems in order to create conservation corridors reaching from the mountains to the coast, and to re-wild areas badly affected by invasive alien plants, farming and development,” says Meiring.

Concludes Meiring, “Transitions made by climate change can, in part, be managed and mitigated by landowners. As a first step, invasive alien plants must be sustainably eradicated and controlled on a large scale. New technology options such as the on-site production of biochar/activated charcoal lend economic value to invasive alien plants and serve as a further incentive to clear and gain thousands of hectares of previously productive agricultural land.”

** The Southern Cape Landowners Initiative (SCLI) is a public platform and think tank for landowners and land managers with an interest in invasive alien plant management, water stewardship and land management. WEBSITE: https://www.scli.org.za