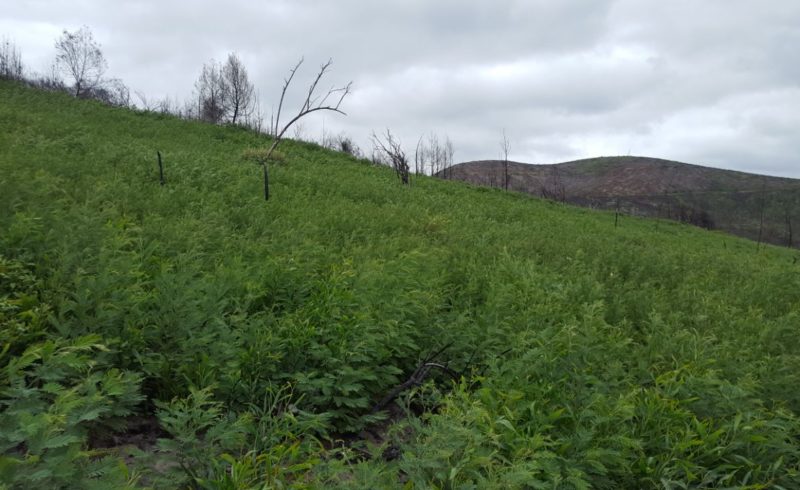 Vigorous regrowth of invasive alien plants, following a fire (such as the Knysna example), leaves landowners and land managers with the daunting task of dealing with a major problem.

Those in favour of hand-pulling weeds, argue that when applying herbicide there is a high level of damage done to indigenous regrowth, which will also perish as a result of the indiscriminate use of herbicide.

There are also a fair number of landowners who feel (right or wrong), that herbicides are detrimental to a healthy natural environment, which ultimately will cascade down to human and animal well-being in contaminated water and food.

Those against hand-pulling of weeds argue that, by hand-pulling weeds, the underlying seed bank becomes exposed, allowing many new seedlings exposure to sunlight, triggering renewed and immediate regrowth.

Also, by hand-pulling larger plants, chances are that the (unintended) effect, by ripping deep and extended root systems from the soil, may trigger erosion on steep slopes, leading to further land degradation.

Ultimately, the scale and nature of the regrowth problem, and perhaps more importantly, the associated cost in dealing with the matter, becomes the deciding factor.

When dealing with several hectares subject to invasive alien regrowth, cost to company becomes a serious factor. Hand-pulling of weeds on any scale is labour-intensive and therefore costly, and the window to apply hand-pulling is small in comparison to the invasive alien plant rate of regrowth.

Where hand pulling of weeds, (especially at an early stage, and on a manageable piece of land), may be an option to landowners, when dealing with large-scale invasion, herbicide application becomes a viable and preferable option.

Registered herbicides, when applied responsibly and according to specifications, hold little negative impact on the environment.